A Piano Piece in Memory of Yitzhak Rabin

Twenty years ago on November 3rd, Yitzhak Rabin was assassinated. When he was shot, I wrote a tune in mourning of the news. It was mourning not only for him, but for the opportunity for peace that may have died with him. I had no particular connection to the Middle East or to any particular side in the perpetual stream of bad news emanating from the region. At the time, as a pragmatic Prime Minister of Israel, he seemed to me the last best chance for peace in the Middle East. There's been little or nothing to suggest otherwise since then.

Below are photos of the two page composition. At the time, I was teaching piano to beginners and intermediates, and composing with the aim of filling a gap in the piano literature for pieces that both sound good and are easy to play. Below the composition are some links and quotes from coverage of the 20th anniversary of this tragic loss. 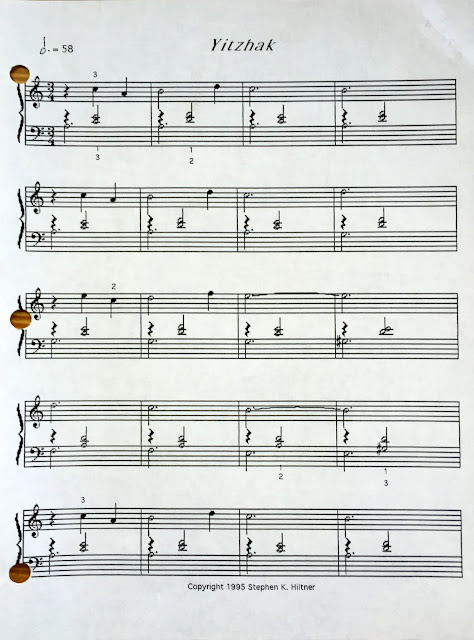 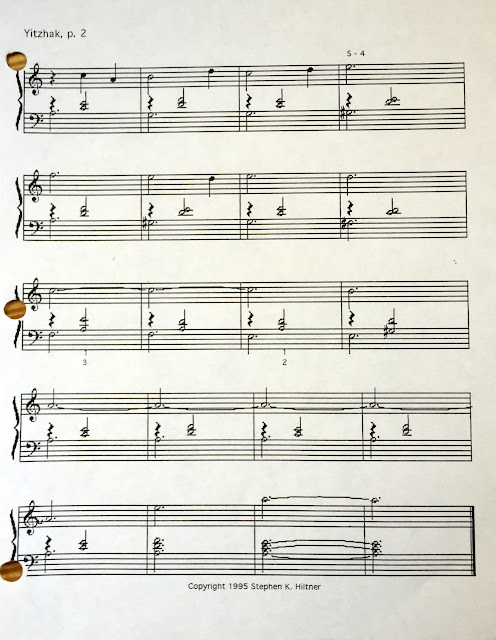 A google search (not sure how long the link will continue to work) showed significant coverage of the anniversary, including an article in the New Yorker.

NPR's coverage describes the event:"Rabin was standing onstage and singing a Song for Peace with one of Israel's most famous singers," said Linda Gradstein, the NPR reporter that night. "As he walked to get into his car, a young, 27-year-old law student named Yigal Amir ran right up to the prime minister and shot him three times at point blank range, fatally injuring him and slightly injuring one of Rabin's bodyguards."

In the NPR article, Dan Ephron, author of Killing the King, describes Rabin as a pragmatist and former military man aware of the futility of war, interested above all in security, and unburdened by the ideology and religious "sentimental attachment to the land" that has made peace so hard to forge since then.

Ephron goes on: "This was a moment, maybe the last moment for the pragmatists in terms of their ability to garner a majority in Israel," he says. "And that moment ended with the assassination. The assassination triggers a chain of events that leads to this power shift. By about six months after the murder, a young politician on the right, Benjamin Netanyahu becomes prime minister. And he really is the dominant political figure in Israel for much of the last 20 years."
Posted by Steve Hiltner