Recent Gigs on the Green Side of Life

This spring, we've been playing our originals and jazz standards on the green side of life, be it a corporate headquarters, a land trust or a church. 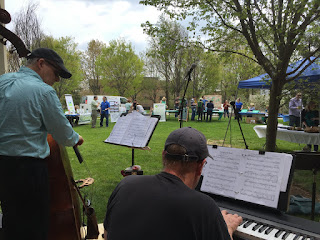 On Earthday, April 22, Sustainable Jazz played in the shade of a serviceberry tree at Church and Dwight corporate headquarters in Princeton, for staff and various nonprofits assembled for the occasion. That's Jerry D'Anna on bass, Peter Lauffer on keyboard, and myself on camera. Church and Dwight, makers of Arm and Hammer products, is a big supporter of sustainability initiatives in Princeton. 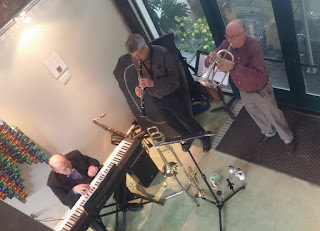 On Mayday we played for a gala event at one of the east coast's premier land trusts, DR Greenway, where Wade R. Martin was given the 2016 Donald B. Jones Conservation Award. This marked the first time we've performed the Sustainable Jazz original repertoire with two horn players. Lars Wendt covered the range from serene harmony on flugelhorn to gut-bucket blues on trombone. Peter Lauffer laid down a groove on keyboard. Among Pete's credits are traveling internationally with alto-saxophone great, Richie Cole. (Thanks to Sarah Roberts for the photo.) 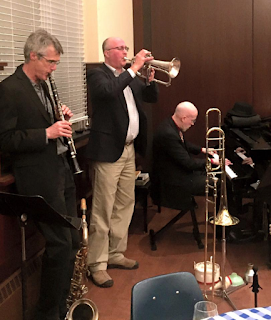 Earlier in the year, we transformed ourselves into the Crescent City Jazz Band to play traditional New Orleans jazz at the annual Cajun-Creole Potluck Dinner at Trinity Church in Princeton. They liked our recipe for musical gumbo so much they booked us for the next four Mardi Gras. Phil Orr's in back, making it all happen on the grand piano.