Every tour has an anchor gig--the most significant gig around which the tour is built. For our Lunar Octet tour of England this past September, that would be our appearance on a Saturday evening at the Scarborough Jazz Festival. We played our all-original jazz/latin music to a full house. 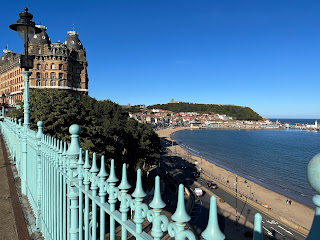 Scarborough, known to Americans primarily for the traditional song made famous by Simon and Garfunkel, is a beautifully preserved town on the North Sea, northwest of York. Before and after our appearance at the festival came performances for jazz societies, a wonderful jazz club in Nottingham, along with a couple enthusiastically received workshops at grammar schools.
It would be easy to think that a grammar school is known for its teaching of grammar, but the name refers instead to students having to test to get in. 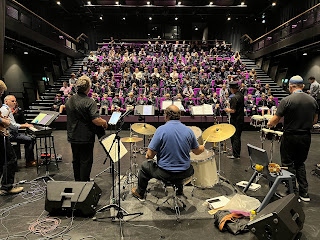 At the Bristol Grammar School, students of varied ages listened intently to our original compositions, then got a quick lesson about the core of the samba groove from our percussionist, Olman Piedra. Many of them joined us on the stage to play basic rhythm patterns, with the rest of the audience up on their feet, cheering on their classmates. At Bristol, and also at the Torquay Boys' Grammar School, it was remarkable how attentive the kids were, and how much energy they gave back to us, which is always appreciated by musicians. 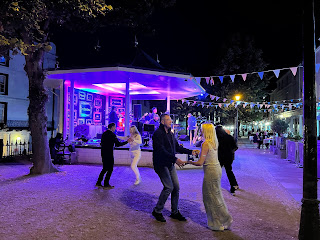 Later that day, we played at the Pantiles for dancers. 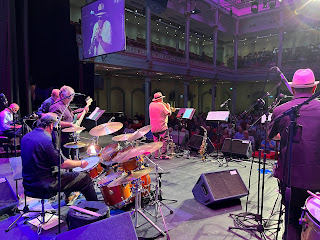 The highlight was our performance at the Scarborough Jazz Festival, 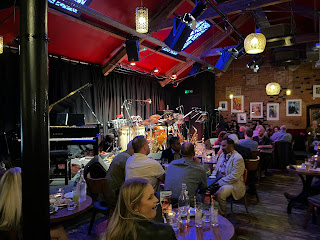 followed the next day by a warm, standing ovation sendoff at a beautiful jazz club in Nottingham, named after the Mingus tune Peggy's Skylight. 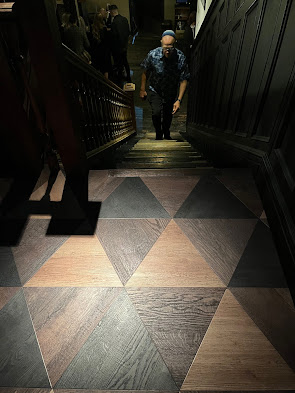 Everything about the club is instantly likable, from the couple who own it--she a chef, he a jazz musician--to the wood inlay staircase. 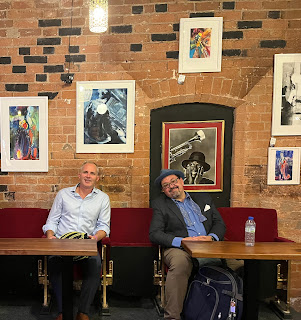 To increase capacity, they repurposed some seating from a theater. That's our pianist Adam Biggs, who joined us for the tour from his home in Bath, and percussionist Olman Piedra hanging with Miles. Adam and Olman excelled at the driver's seat as well as on stage, guiding our vans from gig to gig. 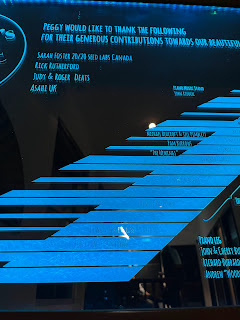 The piano at Peggy's Skylight, which inspired Adam to new heights, was purchased through crowdfunding, with each contributor paying for a different part of the piano--the pedals, the legs, the keys. One person bought an A minor chord. Having founded two nonprofits in my life, I felt a strong connection to the way jazz gets hosted in England, whether it be a society of jazz enthusiasts raising money to host performances in a local venue, or a privately run jazz club that also draws strength from community support.
Playing seven gigs in five days, we bonded more deeply as a group. As the week progressed, each band member's personality became more fully realized on stage. Brandon was on fire in his trumpet solos. Stepping to the front of the stage the last night, Jeff showed a mix of profundity, virtuosity, and humor in his solo bass intro to Samba Over Easy. Aron spun rhythmic tone poems on his congas. A recent addition to our repertoire, Funky River, provided a vehicle for Sam Clark on guitar and Paul Vornhagen on tenor sax to get down to it. Paul and I, when not playing, liked to serve as rhythmic interpreters, expressing through dance the rhythms of the music. The logistics of the trip were a challenge, but the music is a pleasure to play. One audience member, seeing how much we love to perform our original compositions, called our music "joy jazz."
We returned home with the spirit of the British in our hearts. Brits use the word "brilliant" the way we use "awesome." Over the course of the week, we heard many a "brilliant!", a generous sprinkling of "lovely", and only one "bloody hell," which was thankfully aimed at the government rather than our music.
Along with two tours in California, the tour of England made for quite a year for the Lunar Octet. For now, we've returned to our respective homes in Michigan, Ohio, California, Florida, and New Jersey, to await our next convergence.
Posted by Steve Hiltner